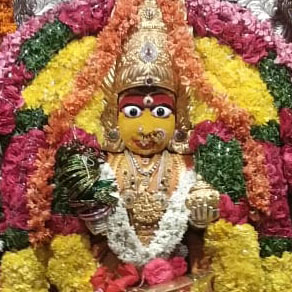 In the year 1813, a Military Battalion in which one Suriti Appaiah, a Doli Bearer was transferred to Ujjaini.  At the time Cholera broke out in a virulent firm, and thousands of people died.  Suriti Appaiah and his associates went to Mahakali Devasthanam at Ujjaini and prayed that if the people are saved from the epidemic, they would install the idol of Mahakali, Secunderabad.

Accordingly after return from Ujjaini, Sri Suriti Appaiah and his associates have installed the idol of Goddess Mahakali made of wood at Secunderabad in July 1815. During construction of sanctum sanctorum a stone idol named as Manikyalamma was found and that the said idol was also installed besides Sri Mahakali Ammavaru.

The Ujjaini Mahakali Devasthanam is published U/s.6(a)(ii) of the Act 30 of 1987 (30/87) and it is under the administration control of the Commissioner, Endowments Department, Hyderabad. 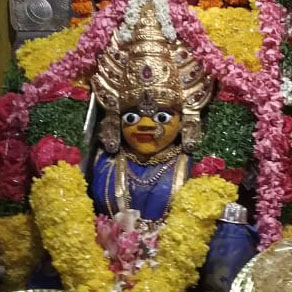 One Sri Ammanabolu Nagabhushanam a philanthropic devotees and prominent businessmen of Secunderabad constructed Kalyana Mandapam by the side of the Devasthanam. Several devotees have been contributing for the development of the Devasthanam. By such contribution a Rudrakshe Mandapam made of Silver has been arranged in Garbhalayam. The Garbhalaya Dwaram is covered by ornamental Silver Sheets, etc.,

There are several oldest temples in Andhra Pradesh in which exist famous goddess temples like “Kanakadurga“ at Vijayawada , ”Bhadrakali” at Warrangal etc. “Sri Ujjaini Mahakali” temple in Telangana region at Secunderabad which is 191 years old. It is visited and prayers offered to the goddess by unending large number of devotees everyday in general and in particularly thousands of devotees in Ashada jathara on principal days which falls on Sunday and Monday. There is no doubt about granting the wishes of devotees by the goddess and devotees fulfilling the vows.

The goddess Ujjain Mahakali sits in a Padmasana posture with four hands with sword, spear, damaru, vessel of amrut, is a beautiful stone idol. It is said by some people that this idol was brought from Ujjain. This idol is covered and fixed with vendi kavacham(silver shield). By the side of Sri Ujjain Mahakali is the goddess of “Manikyaladevi”.

There are no historical records about the existence of this temple. This temple is a symbol of devotion of Shri Suriti Appaiah garu resident of secunderabad as Shri Rama temple at Bhadrachalam is symbol of devotee Bhakta Ramdas of those days.

Shri Appaiah garu became an ardent devotee of the powerful goddess at Ujjain.On one day he has prostrated at her feet and offered prayers expressing gratitude for success of their mission to Ujjain and for showing the way for return journey, also prayed in many respects and expressed his wish that her idol will be installed at Secunderabad for offering prayers for ever. All of them returned to Secunderabad from Ujjain after the goddess felt happy and blessed Shri Appaiah garu for his selfless devotion. She also bestowed kindness on him. In the month of July 1815, Shri Appaiah garu installed a idol made of wood at the place where the present temple is existing and conducting pujas. He built the walls around the idol and constructed a small temple named “Ujjain Mahankali” temple.

It is said that in those olden days this place was inhabited by trees, insects, rocks and lakes. There was a big well and when repairs were being carried out by digging an idol named “Manikyalamma” was found. The same idol can be seen today in the sanctorum of the temple towards Ujjaini Mahankali’s right side. In the year 1864 A.D Shri Appaiah garu replaced wooden idol and installed the two idols of “Mahankali” and “Mnikyalamma” as per the Hindu sastras and relevant pujas. Later, Shri Sanjivaiah the son of Shri Surirti Appaiah garu collected some amount in his village along with his friends got constructed the mandapam in the year 1900 A.D. Shri Laxmaiah (mesthri and representing of army bearer) son of Shri Sanjivaiah collected some amount and constructed few shops along side the temple entrance as a source of income. In the year 1914 A.D Shri Kistaiah son of Shri Laxmaiah formed a committee to conduct daily pujas and archanas by appointing a brahman(Shri Ogirala Subbaiah garu). Sons of Shri Kistaiah and Chikoti Chandraiah garu, prominent vysyas and their family members continued their efforts for the development of Shri Ujjaini Mahankali temple. In the year 1947 A.D the endowment department of the then state government constituted a committee and arranged a Brahman, Shri Yendapalli Venkataramaiah for the purpose of conducting rituals to the goddess.

In the year 1953 A.D endowment department of the then state government arranged board of trustees though the first founder was Shri Appaiah garu, there is a saying that family members of the army bearers also involved in the establishment of the Ujjaini Mahankali temple. The chairman, president, committee members honorary secretary etc are making necessary efforts to develop the temple further.